5 Things You Should Know About The iPhone's Internal Hard Drive 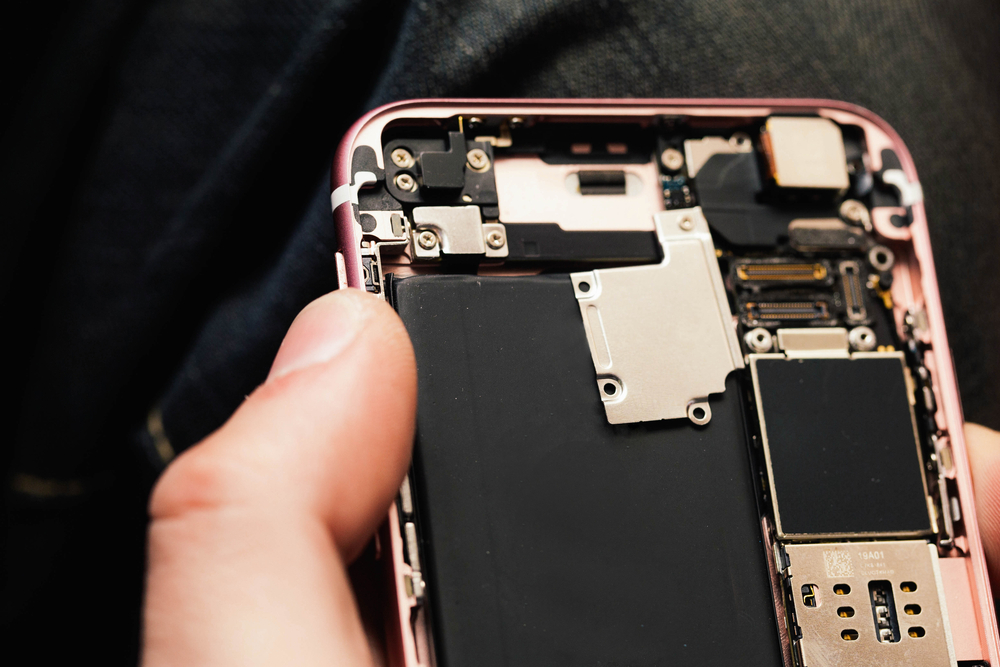 If you're a loyal iPhone user, you probably have your phone nearby constantly. Your mobile device brings your life to the palm of your hands — from listening to music, taking pictures, posting on social media, and chatting with friends. Apple is a recognized leader in the cell phone space, so you can be confident that your iPhone will deliver top performance and stand the test of time.

The phone's NAND chip — comparable to an internal hard drive — makes it all possible. This is where your phone stores personal downloads and files — as well as essential components required to run, such as the code for the operating system, and drivers for hardware and accessories.

Read on to find out what a NAND chip is, how it works, and what else you should know about your iPhone's version of an internal hard drive.

A general understanding of your iPhone's internal mechanisms can be helpful whether you're shopping around for a new phone or dealing with technical difficulties. For example, if your NAND chip is malfunctioning, you probably want to know if you can simply get it replaced (the quick answer is no — more on that below). Here are some more essential facts about your iPhone hard drive.

Technically, a NAND chip isn't a hard drive. A NAND flash chip is a storage technology that can retain data without power. It's more commonly referred to as a memory chip. NAND chips are generally no bigger than a fingernail but can hold large swaths of data, making them ideal for mobile phones. The NAND acts like a hard drive, holding essential user data, like contacts, photos, and operating system code (iOS 13).

Your iPhone's NAND chip is located inside the phone and soldered to the logic board — essentially Apple's term for a motherboard. The logic board connects all the key components needed to run the phone, like the storage, RAM (random-access memory), CPU  (central processing unit), and GPU (graphics processing units), allowing them to work together in harmony.

Since the NAND chip is soldered to the logic board, you can't simply swap it out if it's damaged. Further, a NAND chip is encrypted to allow it to work exclusively with its given CPU in your phone. You can find more details about how it works (and why it's important) in point four below.

3. The data on the NAND chip is encrypted

The typical NAND chip can hold from 4GiB to 1 TiB of data. That data is encrypted using the Advanced Encryption Standard (AES), also known as Rijndael encryption. This is a data encryption method so advanced it's been adopted by U.S. government agencies like the U.S. National Security Agency, NSA, and is considered superior to the usual Data Encryption Standard, DES.

With this high level of encryption, you can be sure that your iPhone data is safe and secure. For example, if someone tries to hack your NAND chip, they will only get gibberish data. Even a code-breaking supercomputer would need hundreds of years to break this high level of encryption. This is an important safeguard, given how much valuable information your phone holds, from personal contact details to your agenda and app passcodes.

4. Your NAND chip can only be read through unique keys tattooed on your iPhone’s hardware

If your phone is damaged, you think to transfer data from the NAND chip to another phone, but unfortunately, it’s not that easy. The NAND chip is encrypted so that it can only be decrypted by the phone itself. Unique keys are imprinted on the phone's hardware chip — sort of like a one-of-a-kind fingerprint. This "fingerprint" connector links your NAND and your CPU, requiring the two components to function together — you can't swap one out. This ensures security.

5. It can be damaged

Unlike your CPU, your NAND chip can't be easily harmed by exposure to water. However, there are many other ways it can get damaged and become unusable. Physical trauma causing bending or breakage — for example, due to a dropped phone — is most common. In some cases, this physical distortion may cause data damage and loss. If the data is still readable, it could possibly be recovered.

However, recoverability is also contingent on other components, like the EEPROM chip — which protects user data — being intact. Since data recovery isn't a given, it's important to run regular iPhone backups to save valuable information you don't want to lose, like your contacts. External storage is easy with the iCloud, which allows you to sync everything from your iPod to your iTunes via your Apple ID.

How to check for a damaged memory chip in an iPhone

If you're buying or selling used iPhones, you want to make sure the NAND chip and other key components are properly functioning.

Symptoms of damaged memory include:

One way you can verify your iPhone memory chip's condition is by researching the device's history. Phonecheck offers a complete device history and diagnostics report, so you can confirm whether or not the memory chip is intact. If you're a buyer, this ensures you don't waste money. If you're a seller, this allows you to get the highest possible resale value. Avoid costly hidden problems by purchasing a history report on phonecheck.com for about the cost of a cup of coffee.

The above guide covers a lot of information, some of it pretty technically complex. It's understandable if you're still feeling confused about NAND chips, your iPhone's version of an internal hard drive. The below frequently asked questions summarize the key points, giving you a quick overview of the facts.

Does the iPhone have a hard drive?

The iPhone doesn't have a typical hard drive like an old-school computer. Instead, it has a flash memory storage chip known as a NAND chip. This essentially serves the same function as a hard drive, housing essential user data and information like operating system details. It's also the iPhone storage space, sort of like an integrated USB flash drive—but much smaller, as it's about the size of a fingernail.

Does the iPhone have a Solid State Drive (SSD)?

MacOS and iOS devices like Macbooks, iPhones, and iPads rely on flash memory. A desktop or laptop computer will use either a hard disk drive, HDD, or a solid state drive, SSD. An SSD storage device performs the same function as a hard drive but is the more modern technology (for example, it's usually smaller and faster). Today's Macs are sold with three types of storage devices: hard drives (only in the base 21.5″ iMac and Mac mini), SSDs, or fusion drives.

Get a complete device history report with Phonecheck

Whether you're selling an iPhone 5 (time to upgrade to iPhone 6?) or buying a used Android (maybe you're over Apple and want to try a Samsung?), you want a guarantee of quality. Due diligence helps sellers command the maximum resale price and protects buyers against bad investments.

Phonecheck's device history report is a fast, easy, and reliable way to confirm that an iPhone's internal storage chip is in good condition. Don't buy a used device without a Phonecheck Certified History Report.