Smartphones of the Future: What Features To Look for in 2017 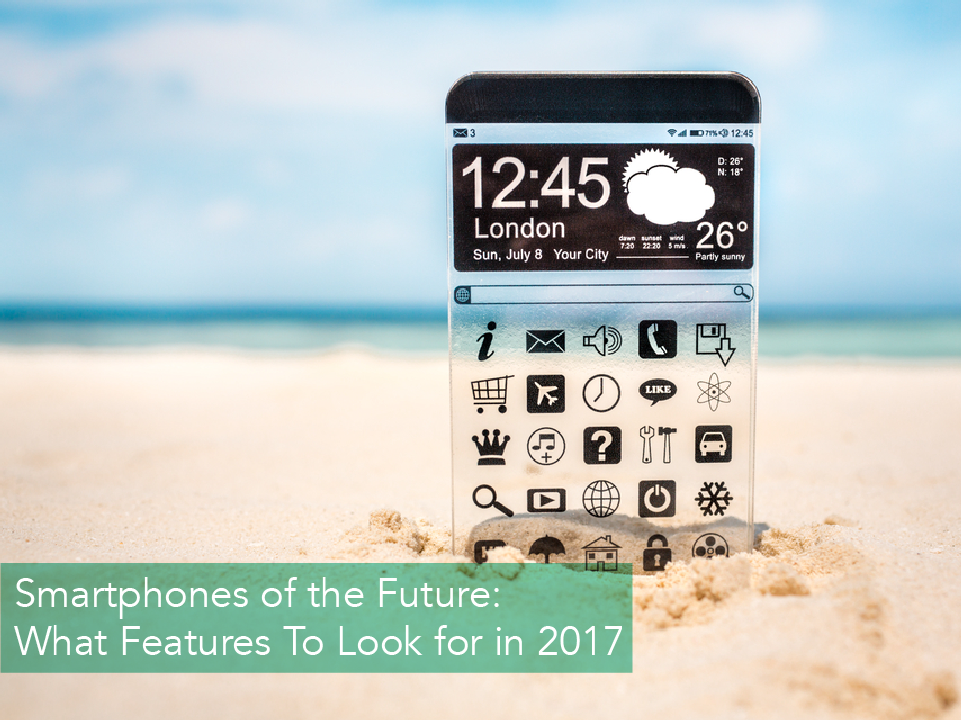 Smartphones of the future are set to shake up the tech world in 2017. Savvy smartphone users will soon have innovative devices that impact their personal and professional lives in new exciting ways.Tom Ashbrook of On Point, notes, “No headphone jack. Fancy cameras. New colors. No revolution. But relentlessly in the near-decade now since the iPhone’s debut, smartphones – Apple, Samsung and more – have flooded, changed, our lives. For many, they’re almost attached to the hand.”From VR to incredible foldable screen technology, impressive features and unique designs are certainly in store. Smartphone innovation is fueled by competition, and each company wants to be the industry leader.Samsung, Apple, and Google are only a few companies aiming to reinvent smartphones in 2017. Amazing flagship smartphones are on the horizon, and they will blow and bend the minds of users around the world.Let’s take a look at the future smartphone tech to come in 2017.

It is difficult to say what Apple’s next iPhone will be called. But it really doesn’t matter, since Apple might launch a few high-end and unique features in 2017.The 10th anniversary of the iPhone may usher in a new Apple flagship device tech fans can’t resist. According to Forbes, “Credible iPhone 8 rumors point to the biggest iPhone yet next year.” The next iPhone will boast dual camera technology. It is also set to be the most powerful iPhone to date with an upgraded A11 processor and iOS 11.The iPhone 8 or 7s rumors include waterproof technology, no headphone jack, a reversible USB charger, and may be the slimmest Apple smartphone generation ever.

Samsung fans are in for a tech treat with the launch of Samsung’s next flagship smartphone, the Samsung Galaxy S8. It may be the most innovative device the company has ever produced.The Galaxy Note 7 debacle may have some worried. However, due to the recall, Samsung will be sure to make their next smartphone a powerful and safe device.The Galaxy S7 accounted for 35 percent of all smartphone sales in the US, beating Apple by three percent by June 2016, according to Android Authority. Successor to the Galaxy S7, the Galaxy S8 is predicted to perform as good or better in the market.The smartphone rumor mill suggests that the Samsung S8 will launch without a headphone jack, and boast an audio USB Type-C port. This appears to be the future of all smartphones.One of the most impressive features is the 4K resolution display, becoming the second smartphone ever with the 4K feature, second to Sony.In terms of power, Samsung’s next flagship smartphone will come equipped with the Snapdragon 830 processor by Qualcomm, 6GB of Ram, and also have 5G network capability.

The Samsung Galaxy S8 is certainly exciting. But the Galaxy X will be the most mind-bending smartphone ever developed. Rumors have it that the Galaxy X will boast revolutionary foldable screen technology, according to Digital Trends.As the era of edge tech is coming to a close, foldable displays may be the next innovative era. And foldable screen technology is not the only amazing feature Samsung fans should get excited about.The Samsung Galaxy X will be equipped with the 4K Super AMOLED display with 2160 x 3840 resolution. This revolutionary smartphone of the future will also have a dual rear-facing camera with a screen in excess of 5.7 inches.Power is also in the Galaxy X specs. A 4,000mAh battery, Qualcomm’s Snapdragon 830 processor, and 6GB of Ram will all be in the hands of Samsung fans in 2017. An iris scanner and water resistance is also rumored for the Galaxy X.

The future flagship smartphone from LG may have even more camera features in 2017. Traditionally, LG has focused on camera technology, as seen in the G4 and G5 models. And the LG G6 is no exception.According to tech rumors, the LG G6 will come equipped with a 26 MP 4K camera with a few exciting features for amazing image quality and compatibility. The display will also boast a UHD display, comparable to other 4K equipped devices.The LG G6 will also have some processor power behind its design. It will have Qualcomm’s Snapdragon 830 processor with 5GB of Ram as well. LG also announced wireless charging transmission, which can get your battery life to 50 percent in 30 minutes, according to TechRadar.

Google Pixel Sets the Bar for 2017

Google Pixel is the first 100 percent design effort by Google in terms of smartphones. And Google certainly set the bar for all smartphone makers in 2017. Google Assistant, Daydream VR, and unlimited cloud storage are a few trend setting smartphone features.Google’s new flagship smartphone is equipped with Qualcomm’s Snapdragon 821 processor, Android 7.1 Nougat software, and offers 4GB of Ram. However, the future innovation may just be in the mind-blowing features.CNET contributor Lynn La says, “Now that many are justifiably cautious of Samsung phones, the Pixel is a great option for Android users wondering where to go next. Its brand cachet already rivals Samsung and Apple.”It has a back cover fingerprint sensor, 4K 12.3 megapixel camera, and AI Google Assistant. Google Assistant is an AI voice search feature that allows users to get fast info. It even has contextual knowledge, with some saying it will revolutionize SEO.Google Pixel is also the first smartphone with VR capabilities. Combining VR with smartphones is another innovative apex in the industry. Users can use Google Daydream VR headsets and experience their phone in an entirely new way.The future of smartphones is truly exciting. With so many smartphone makers competing with one another, the innovation possibilities are endless. This is especially true now that industry leading tech companies are trying their hand in the industry too. However, the choices are all compelling. It may be challenging to simply choose just one.